Nominee of the 2016 Hollywood Music in Media Awards

I’m a nominee of the Hollywood Music in Media Awards with “Pop Army” in the Dance category! This is really exciting!!! “Pop Army” keeps on getting more and more attention. After being released in Canada and in the UK, the single charted on UK’s Music Week’s Commercial Pop Club Chart. “Pop Army” made the semi-finals of the 2016 Unsigned Only Music Competition and was nominated for the Pop Song of the Year of the 2016 IMEA Awards (International Music and Entertainment Association). It’s my third year being nominated for an HMMA and it’s a true honor! ✨ 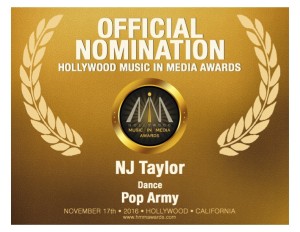